Review:Ruing and Rising (The Shadow and Bone Trilogy #3) by Leigh Bardugo. 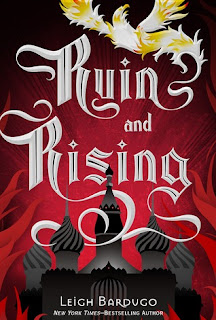 The capital has fallen.

The Darkling rules Ravka from his shadow throne.

Now the nation's fate rests with a broken Sun Summoner, a disgraced tracker, and the shattered remnants of a once-great magical army.

Deep in an ancient network of tunnels and caverns, a weakened Alina must submit to the dubious protection of the Apparat and the zealots who worship her as a Saint. Yet her plans lie elsewhere, with the hunt for the elusive firebird and the hope that an outlaw prince still survives.

Alina will have to forge new alliances and put aside old rivalries as she and Mal race to find the last of Morozova's amplifiers. But as she begins to unravel the Darkling's secrets, she reveals a past that will forever alter her understanding of the bond they share and the power she wields. The firebird is the one thing that stands between Ravka and destruction—and claiming it could cost Alina the very future she’s fighting for.

“They wanted a Grisha queen. Mal wanted a commoner queen. And what did I want? Peace for Ravka. A chance to sleep easy in my bed without fear. An end to the guilt and dread that I woke to every morning. There were old wants too, to be loved for who I was, not what I could do, to lie in a meadow with a boy’s arms around me and watch the wind move the clouds.”

From the beginning of this series i thought that this story was special and unique,full of surprises and strong characters,full of adventures and mind-blowing moments..Everything was exactly like i wrote above,but i honestly admit that i regret the fact that i never got the chance to read about a character i loved-yet,my feelings changed step by step and transformed into something i still don't understand,because in a way everything started to make sense and that character started to be exactly what he was: a villain.Yes,i wished something huge and something amazing would happen ,but it seems like for this story to be amazing everything had to happen exactly like it happened.

In this book Alina's faith is tested,making her wish for something more,something that could help her stop the Darkling and something that could save the entire Ravka.But somehow everything is a challenge and the Darkling is determined to have her and the third amplifier with all costs.Yet,nobody knows where the third amplifier is,nobody suspects where it could be,even with Mal's great tracking skills..What if the amplifier is right in front of them?What if in order for Alina to have all the amplifiers someone she loves has to die?What if...

This whole book was crazy complicated and it drove me insane,cause i hoped for something that i knew that was impossible,yet at the same time i started to understand everything better than before.And,i admit that at some point i was a little shocked and then angry and then i accepted everything that happened.The first time i've read this book i was angry because of what happened to the Darkling(Like i said i was fascinated)..and then i was angry because of what happened to Nikolai..But,let's just say that i got over it now and my mind reacted like this:Okay,this had to happen..Okay,Nikolai,i'm sorry but..Nvm..

In the past i was dissapointed because of the way this book ended,but my opinion changed and right now i'm glad that it wasn't worse and  we get the chance to read about how everything happened and what happened after the final battle.Overall,this series was fantastic and mind-blowing.Many surprises.Betrayals.Fantastic stories about the Grisha's,mainly about Mozorova.Fiction,i know,but i still liked it.This author managed to write something good,something that transformed and turned into something fantastic.

Why i didn't wrote this review before?I honestly don't know.I promised myself that if i ever get the chance to read this series again i will write something about the end of the series.And,here i am,trying to write my jumble-bumble mess that is in my head.Yikes,i know,that doesn't sound good..But bear with me and let's see what it will be in the end.

Alina's evolution was very slow at first.She was a girl who never thought she could be powerfull or seen by others.She was someone who wanted to help,but at the same time she wanted to be left alone.She was someone who trusted too much and got burned too many times.But this book,this piece of adventure-the end of everything that started in the first book- was that part of the story where i got the chance to see the real Alina.The girl who wanted something so much she fought for it until the end.She evolved into someone worthy of her title.And i liked that..There were times when i hated her a little..She was easy to manipulate(Ex:The Darkling and his way of seducing her).Obssesive-when she found out she chould have all three amplifiers.Naive.And..a little drama queen.But she was a soul who saw too much darkness despite her power.

Mal?Ha,i think i know what i want to write about him ..BUT..I won't ramble like a lunatic.Just a little,i promise!Malyen Oretsev,such a strange character..Well,he was at the beginning.Right now?I think he was the only character in this story who wanted something from the beginning until the end -without doubt,without flinching,without any remorse-even if that meant he had to go through hell to get what he wanted.I know,it sounds a little strange the way i wrote it,but i think -and it seems that it took me a while to understand this- Mal was there for Alina from the beginning until the end.And yet..The whole crazy "i'm good for you but he is better" story,something that drove me crazy,because despite all those moments when i wanted to strangle Mal at some point i started to like him..Well, he was a little immature and dramatic with the whole "i'm not good for you because you could have a prince" thing and all those "bad" moments he had in the first books,but ,well,he could've been worse,right?And,no,i didn't want him to dissapear or to die.I wanted him there and i wanted him to succeed,to show everyone that he wasn't that bad.Ha,i know..He grew on me.Yikes.

“Being around Nikolai was always like this, watching him shift and change, revealing secrets as he went. He reminded me of the wooden nesting dolls I'd played with as a child. Except instead of getting smaller, he just kept getting grander and more mysterious.”

Nikolai...Why ,oh,why?This character was like a freaking boomerang from the beginning,in a good way.Fantastic,charming and a little crazy.Good manners and a brilliant mind.The perfect character for this kind of story,yet behind all those "crazy moments and brilliant mind" there was a story,something nobody knew and ,in a way,something that won't be revealed,not entirely.I adored him and hoped to get the chance to read more about him..And when i got to that chapter,the chapter that made me change my mind about the Darkling(Well,not entirely.I started to change my mind about him in the second book),i was shocked and i didn't believe what i was reading.But ,in my heart,i knew ,and i hoped, that the future will bring something good and fantastic for him.

“None of them were easy or soft or simple. They were like me, nursing hurts and hidden wounds, all broken in different ways. We didn't quite fit together. We had edges so jagged we cut each other sometimes, but as I curled up on my side, the warmth of the fire at my back, I felt a rush of gratitude so sweet it made my throat ache. Fear came with it. Keeping them close was a luxury I would pay for. Now I had more to lose.”

And there were Genya,Zoya,David,Tamar,Tolya and all the rest.Characters that at first i didn't like,but step by step i started to enjoy reading about them.Characters that turned out to be better and an important part of this crazy story.There were more,i know,yet i can't make myself write about them.This adventure was full of great and amazing characters-some who never got the chance to see the end and some who were there until the end.I know,i know,it wasn't real,but it could be if you want it to be.Ha.My mind is a strange place.

“I will tell you a story, one I used to tell to a little boy with dark hair. A silent boy who rarely laughs, who listened more closely than I realized. A boy who had a name and not a title”

And here comes the moment when i write about someone who i wished he had a different end,a different path,because,like Nikolai,he was charming and powerfull,arrogant and ambitious.Someone who was raised to think that he should never be a slave,someone who fought for everything he wanted,even if it was wrong.And,yes,this is about the Darkling.A character who was fascinating ,but someone who step by step changed and i started to see exactly who he was or what he was: a monster.I never write about the villains in my reviews,i try to keep it strictly about the characters i like,but..Like i said above ,at some point i was fascinated by him and i hoped for a better ending for him.This villain?Charming and cunning,i might say one of the best.Ah,i have to stop,because i don't want to change my mind about him.Not again.Never again.

When i started writing this "whole crazy mess" that i liked to call a review,i never thought that i had so much to write,because the first time i tried to write i didn't  understand what really happened in this book and i wrote things i shouldn't write.Now?I got to the point where i want to write more and more about this story.And if i start i won't stop until i'm old and gray,something that i do not wish yet to happen.Haha.

I know,this is confusing and i wrote way too much about the characters and a little about the whole story,but i don't want to give too many spoilers and i'm not sure i can write something without spoilers.And i want to stop right now,right here.Because i want you to read this story and make your own opinion.Trust me.Read it ASAP.Or try to read it before you see the tv show.