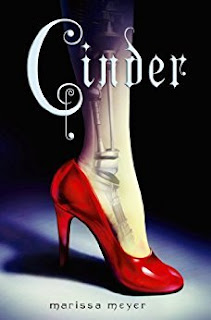 Humans and androids crowd the raucous streets of New Beijing. A deadly plague ravages the population. From space, a ruthless Lunar people watch, waiting to make their move. No one knows that Earth’s fate hinges on one girl. . . . Cinder, a gifted mechanic, is a cyborg.
She’s a second-class citizen with a mysterious past, reviled by her stepmother and blamed for her stepsister’s illness. But when her life becomes intertwined with the handsome Prince Kai’s, she suddenly finds herself at the center of an intergalactic struggle, and a forbidden attraction. Caught between duty and freedom, loyalty and betrayal, she must uncover secrets about her past in order to protect her world’s future.

“Even in the Future the Story Begins with Once Upon a Time.”
Oh,oh..Why,oh,why did i stop reading this series?I wonder why?Yikes,when i decided to re-read Cinder i was a little excited and afraid:
1.Despite the fact that i've read this book before i couldn't remember why i gave it 3,5 stars.Now i know,but i gave it a little more.
2.I've read a few reviews and let's just say that i want to read the next books.Huh.
3.Fairytales?Well,those are my favorites and i love it when authors try to use them and write something amazing.Something good.
This one was good but it could have been brilliant.
And why not a cyborg Cinderella?Creative writing and a good imagination.The best combination.
I admit that in the past i thought that this book wasn't for me,expecially after reading it once and stopped there with the story without any thoughts about reading the next book.Well,it wasn't bad bad and i gave it 3,5 stars...I think.So why did i stopped?Right now i'm angry at myself for being so distracted and thoughtless.
But..That was in the past.Now?
Yikes.
The whole book was a rollercoaster.Cinderella recreated in something more dangerous and a little crazy.Cyborgs.Androids .Humans.Crazy people who thought they were better than others(Now,this is about Adri and Pearl.Hah,now i remember that girl's name).And Lunars.
Now i wonder..Are they real?Lunars?Yikes..Joking.
And there is Cinder.Whose life is a mystery.Well,her past is a mystery,but step by step everything changes for her.And i was happy,thrilled and overjoyed ..Until the story got tragic and my joy dissapeard.Hah,yeah,that's how i know this story is good.Good and Bad.Happiness and sadness.Good things and...Lunars.Couldn't help myself i had to write that.
But overall,the story was good and it had some action( a little ,not much),tragic moments,good evolution,twisted situations and the whole bang.
But,despite the whole gibberish i wrote abovei expected more .I wanted a little more action,i wanted to feel like i couldn’t breath until i’ve read what was happening next.I know,it was better like this,but like i said above:i could have been brilliant.The plot was perfect and could’ve been twisted in a different way,somehow to make you think that it was the best book you ever read.
One thing i’m certain: i liked was how Kai and Cinder met,the istant friendship and whole "guest of honor" thing at the ball,even if everything got crazy at some point and everything got twisted.Well,it was fun to read about them together,I got my wish, it wasn't exactly what i had in my mind,but it could have been worse.
What happened to Peony broke my heart.She was a sweet character who was good to Cinder,i think the only character,besides Kai.It had to happen ,right?Well,not sure about that,because i liked her and her death was heartbreaking.
And Iko!Oh,my,how could i forgot about her.Android or not,Iko proved she was a good character whom i adored.She was fun to read about and i hope i can read about her more.
Lies,Betrayals.And one evil queen and her minions.
If you wonder why i wrote that..Well,let's just say Queen Levana is a heartless character,whom i disliked from the beginning.Well,that's explains it,right?Ha,i wish.Adri is a peach compared to Levana,something that shocked me at first.
Well,it seems that this time i enjoyed reading this book and i want to know what will happen with Cinder,Kai and the rest.
The left me wondering what could happen next and what will CInder do about everything that she discovered about her past.But,that,i will find out only if i read the next book,right?Well,that’s waht i want to do and i’m going to do right now.