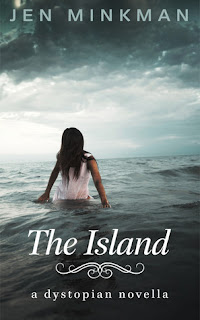 ‘I walk toward the sea. The endless surface of the water extends to the horizon, whichever way I look.

Our world is small. We are on our own, and we only have ourselves to depend on. We rely on the Force deep within us, as taught to us by our forefathers.

If I were to walk westward from here, I would come across a barrier – the Wall. Behind it, there are Fools. At least, that’s what everyone says.

I have never seen one.’

Leia lives on the Island, a world in which children leave their parents to take care of themselves when they are ten years old. Across this Island runs a wall that no one has ever crossed. The Fools living behind it are not amenable to reason – they believe in illusions. That’s what The Book says, the only thing left to the Eastern Islanders by their ancestors.
But when a strange man washes ashore and Leia meets a Fool face to face, her life will never be the same. Is what she and her friends believe about the Island really true?

Or is everyone in their world, in fact, a Fool?

"The Island" was a short dystopic story about Fools and Unbelievers.About two groups of people who believed that they were different.In a way the Unbelievers were different because they were the kind of people who thought that it was better to send the children,once they old enough-ten years old- away from the parents ,in a place where they had to grow up thinking that it was better for them.

All i can say right now is that the book was too short!I want more,even if it was a little strange how the Unelievers accepted how they lived.And the Fools-i wonder why they were called Fools.I don't understand why,but i'm pretty sure that they were better than Unbelievers.Mainly,because they were united .
First when i read the word "Fools" i thought that maybe they were something dangerous,but no,they weren't.

This short story was the kind of book i like.I'm addicted to this kind of books,and i'm sad that it was too short,but the way everything happened was what mattered the most for me.

Leia and her twin brother Luc had to leave home when they were ten years old.It was a hard thing to do,but in a way how things turned out from there was exactly what the Unbelievers needed.A way to find out the truth about the Fools and about the things they've done.About the world across the ocean.About the wrong decision they had to make from the beginning.
Even if they believed that it was better to let the children to take care of themselves,it was wrong.

Everything started with a book full of stories,and everything ended with the truth about the world they lived in.And it was amazing.