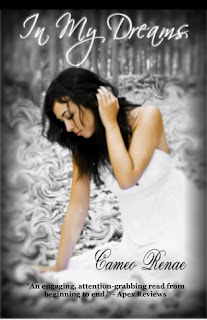 It was happening again. The dreams. The nightmares. It was something that seventeen-year old Elizabeth Hayes thought she'd outgrown... dreams that would come true...detailed premonitions of how people would die.
But this time, she has a dream of her boyfriend, Michael Young, and soon gets a call saying that Michael's body has been found...dead. Her world is changed in an instant, but that's just the beginning. Michael's been murdered, and now his killer is after her.
Join Michael as he learns about his supernatural gifts to help save Lizzy, and Lizzy's battle to stay alive.
In My Dreams is a story of unconditional love. The kind of love that lives beyond the grave. It is a story that will grip your heart, break and re-mend it, and take it on a wild ride of emotion.

In My Dreams is the story of a seventeen girl named Elizabeth "Lizzy" Hayes.Before she finds out that her boyfriend was murdered she had a strange dream like a premonition.What Lizzy didn't know was that the dream really happened...
I was really excited to read this book.The decription was the one that got my attention and i was really curious.It was such a sweet and incredible story,but there were sad moments.

This is something new for me because until now i didn't read books like this one.I liked how everything was mixed and all the things Michael did to help Lizzy.And another thing that i liked was that even if Lizzy was scared she did exactly what she needed to do in order to survive.

The idea of Michael contacting Lizzy in her dreams was really interesting and original,but every time that happened i ended up being sad because of the way the dreams ended.But at least he was there for her.
Yeah,there were moments-when she dreamed- that i thought were a little too much,but the rest i liked.
This wasn't exactly how i expected,but i have to admit that i liked it.The story was pretty good and the characters amazing.

Cameo Renae In my dreams Review