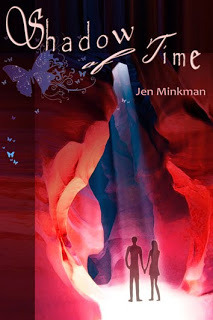 All Hannah needs is a nice and quiet vacation after her first year of teaching French at a high school. She joins her brother Ben for the summer in their mom’s log cabin in Arizona. There, she meets Josh again, Ben’s childhood friend from the Navajo reservation. The little boy from the rez has grown up fast, and Hannah can’t help but feeling more for him than just friendship. But fate apparently has something else in store for her. And it’s not peace and quiet. Night after night, Hannah is plagued by strange nightmares about the past of Navajo Nation and terrifying shadows chasing her. They seem to come closer – and why is Josh always present in her dreams? Sometimes, the past has a way of catching up with you.

Shadow Of Time was something new for me.Something amazing and it kind of made me wonder why i didn't read until now books like this one.It was a beautiful story and i have to admit that i'm really glad that i read it.

Yes,it was a surprise for me because when i first read the description i didn't know what to think,but let's say that the story was exactly what i really wanted to read at the moment.
I'm not really sure how to start.There were so many things that happened in this book and i'm a little confused.

Why it was something new for me?The story is not really simple.This was about Hannah and Josh-two young people who find each other ,but there is something that keep them apart.Well,at least that's not for too long.
There were moments when i didn't understand what was happening with Josh:why he was trying to stay away from Hannah,but  when i finally read Josh's reasons i have to admit that i was a little shocked.

After one night when Hannah was attacked by three strangers she began to have nightmares.

That part was really interesting.Hanna's nightmares turned out to be more than i thought,because at some point i started to wonder if that really happened or those were just dreams inflicted by the warlocks to scare her.I admit it was a bit strange how everything happened.

Josh and Hannah were meant to be together and nothing or nobody could stop that,although at some point Josh's behavior made me doubt that.

This book was full of beautiful and amazing moments,but there were a few bad ones almost heartbreaking.
What i liked the most was how the author described everything-especially when she wrote about the Dinè.


I knew from the beginning that i will like this book.That was because i loved the description,but honestly it was much betther than i expected.