Review:Ruining you by Nicole Reed. 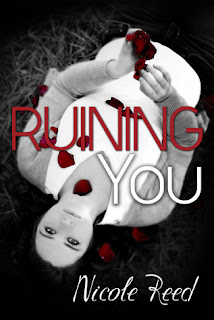 For a girl who dared to tempt death, living is the only promise that matters now.

Jay’s life almost came to a forced end when her darkest secrets were revealed and the one who she chose to give her future to was ripped away. Now, everything she kept hidden is the topic of everyone’s conversation, and not all are sympathetic. Someone wants her horrific past to dictate her future, and another is determined to help her choose a different path.

In conclusion to Ruining Me, Kane and Rhye know that Jay is worth the fight, but waiting for her to find herself may ruin them all.

“Don't let go now, Jay. One-by-one, place each piece of your soul back together, but this time, make it stronger. Close your eyes and do it.”

After reading the first book in the “Ruining” series I wanted to know what will happen next with Jay.Well,let’s say “Ruining You” was much better than the first one,but in this one it was really hard to keep reading without remembering what happened to JT and Cal.

In “Ruining You” Jay is trying to move on with her life.It’s not easy,but somehow she does that.Her past haunts her-all the bad things that happened to her,what happened to JT and Cal,but she’s not alone.

My favorite moment at the beginning was the one when I read about Eli.God,I love that guy!He was exactly what Jay needed in that moment.Eli’s situation was similar to Jay’s and he knew how she felt in that moment.Because of him she started healing slowly.I loved that he was so supportive and he listened to her.

I was glad when Jay finally realized that she needed to face everything.The first step was going home where her parents,friends and Kane waited for her.

But again things are not really easy ..mainly because of two guys..

Kane was my favorite from the beginning,but I can’t ignore the fact that Rhye helped Jay(his help wasn’t so good,but he was there for her when she needed him).
Between Kane and Rhye it was obvious from the beginning with which one Jay will end up.And I have to admit that it was the right choice.

“I place my lips back against his and whisper, “No that’s just it. You are doing everything right. You take the hell and make it heaven.” Looking deep into my eyes, he searches again for something.”

There were so many moments when I thought that this book won’t be so complicated and that the one that hurt Jay so bad would stop..but I never expect what happened at the end of the book.Seriously?Even now I’m speechless.

This was one of those books that made me smile and hope for a happy ending.

The kind of book you can't put down because you won't be able to stop reading.Well,at least that happened in my case.