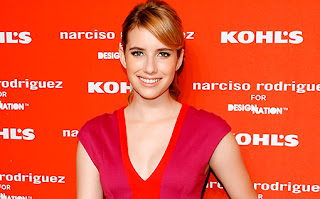 Emma Roberts is returning to TV as the star of Fox’s Delirium.

The Nancy Drew and Scream 4 actress has been cast in the lead role in Fox’s pilot based on the bestselling young adult novels by Lauren Oliver.

The books take place in an alternative present-day Maine when civilization has been partly destroyed by war and a totalitarian government teaches that love is literally a disease (commonly called the delirium). There’s a surgical cure for love that’s mandatory for citizens 18 and older. The story follows 17-year-old Lena (Roberts) who is eagerly awaiting her turn to get the cure when she falls in love with an Invalid (a person who hasn’t taken the cure that lives in the wilderness). Not surprisingly, the story has draw some comparisons to The Hunger Games and Twilight.

Roberts previously starred in the Nickelodeon series Unfabulous then went onto big-screen roles including the upcoming Empire State and We’re the Millers. Karyn Usher (Prison Break) wrote the pilot and is an executive producer alongside Peter Chernin, Katherine Pope, Paula Mazur and Mitchell Kaplan on the 20th Century Fox TV project.