While it lasts de Abbi Glines. 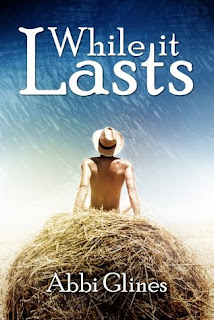 Maybe driving home after a few (or more) shots of tequila had been a bad idea, but hell, he did it all the time. The cops had to have been freaking bored to have pulled him over. He wasn’t even swerving! That’s Cage York’s story and he’s sticking to it.
Unfortunately, his baseball coach isn’t buying it. Cage has a free ride to the local junior college for baseball -- or he did, until he’d gotten a DUI. Now, Cage has to decide: does he drop out and give up his dream of getting noticed by a college in the SEC, and possibly making it into the Major Leagues -- or does he give in to his coach’s demands and spend his summer bailing hay?
Eva Brooks planned out her life step by step when she was eight years old. Not once over the years had she lost sight of her goals. Josh Beasley, her next door neighbor, had been the center of those goals. He’d been her first boyfriend at seven, her first kiss at ten, her first date at fifteen, and her first tragedy at eighteen. The moment she’d received the phone call from Josh’s mother saying he’d been killed along with four other soldiers just north of Baghdad, Eva’s carefully planned life imploded in the worst way possible.
Cage isn’t real happy with his closet-sized bedroom in the back of a foul smelling barn, or his daily interactions with cows, but he knows that if he doesn’t make his coach happy then he can kiss his scholarship goodbye. Only a sick and twisted man would decide his punishment was to be working on a farm all summer. No hot babes in bikinis waiting to meet a Southern boy to make her vacation complete. Just him and the damned cows.
Oh -- and an uptight, snarky brunette with the biggest blue eyes he’s every seen. But she doesn’t count, because as hard as he’s tried to charm her out of her panties - he’s pretty sure she’d rather see him hung from the rafters than let him get a taste of her pretty little lips.


*****
Cartea este programata sa apara in 31 Iulie,desi pe GoodReads scrie ca in 7 August,autoarea a scris altceva pe blogul ei..Este al treilea volum din seria Sea Breeze de Abbi Glines.Am citit primele doua volume si mi-au placut destul de mult.Recenzia primului volum o gasiti pe blog: Breathe,si in curand o sa pun recenzia volumului 2(Because of Low).Pana atunci mai jos gasiti cateva fragmente din While it lasts pe care le-a postat autoare pe blogul ei.
*****
#1
My phone started ringing in my pocket and I pulled it out to see Low’s name lighting up the screen.
“Hey baby,” I replied backing up and sinking down onto the bed. Surprisingly the mattress wasn’t bad.
“So how is everything? Are they nice?” Just hearing Low’s voice made me feel better. Not so alone.
“I’ve only met the guy’s daughter and the next door neighbor.”
“Oh, so there’s a farmer’s daughter?” the teasing tone in Low’s voice made me chuckle. Yeah, there was a farmer’s daughter alright but it wasn’t what Low was thinking.
“There’s a farmer’s daughter but she hated me on sight. Crazy I know and, to think, I thought it was impossible for a female to hate me until after I bagged her then forgot her name in the morning.”
“She hates you? That’s… odd.” Low’s voice trailed off like she was in deep thought.

#2
Damn. Maybe I should come out to the country more often. I didn’t realize they grew girls like this out here.

“Eva, you aren’t ready yet? I thought we were gonna make the six-thirty show,” Jeremy said from behind me. Ah, hell no. Surely not. This goddess was with that guy? I brought my eyes back up to her face to find her blue eyes staring directly at me. They really were the bluest fucking eyes I’d ever seen.
“Who are you?” the icy tone in her voice took me by surprise.
“Down, girl. Play nice, Eva. This is the guy your daddy has helping him this summer.” Her eyes flashed something that looked like, disgust? Really? I’d seen that look in a girl’s eyes before but never directed at me. Interesting.
“You’re the drunk,” she stated. It wasn’t a question. So I didn’t reply. Instead, I flashed her the sexiest smile I had and took a step toward her.
“I got a lot of names, baby,” I finally responded.
Her eyebrows arched and she straightened her stance before nailing me with the coldest glare I’d ever been witness to. What was this chick’s deal?
“I'm sure you do. Let me guess, STD, loser, jackass, and drunk- just to name a few,” she clipped stepping out of the door and slamming it behind her. Her gaze shifted to Jeremy, who was chuckling behind me.


“You didn’t tell me you had company, Eva,” Becca Lynn cooed twirling one of her long blonde locks around her finger while batting her eyelashes in Cage’s direction. Good lord she was ridiculous.
“I don’t have company Becca,” I snapped hoping to get her attention but it didn’t work. “This is Daddy’s summer help. He’s working with our cows. Because he got a DUI and he is serving time.” Maybe that would wake her up out of this worshipful gaze she had on him. But it didn’t.
“Oh, so you’ll be here all summer?” she asked still smiling up at Cage like he was a freaking rock star.
“Looks that way,” he replied in an amused tone. Great even the man whore beside me thought she was making a fool of herself.
“Well, when you’re not working and get bored I could keep you company—“
“Becca Lynn,” I raised my voice to stop her from offering to come warm his damn bed in the barn.
Finally, her eyes shifted off Cage to meet my gaze. The twinkle in her eye told me she knew exactly how it sounded and she didn’t care not one bit.
“Thank you. I’m sure that I’ll be needing someone to show me what to do for entertainment when the work-day's through. I can’t think of anyone else I’d rather have take me around and enlighten me to the things to do out here in the country.” The sexy drawl thing he had going on just pissed me off. It also gave me chill bumps and made my heart race.
Becca Lynn’s eyes swung back over to eat Cage alive. “That sounds like a really good plan,” she closed the distance between them and held out her perfectly manicured hand. Hot pink nails that I was sure matched her toenails, wiggled in his direction invitingly. Becca was as high maintenance as they came around here. “I’m Becca Lynn Blevins.”
Cage closed the small amount of space Becca had left between them and slipped his hand into hers. Did Becca just shiver? “Cage York and it’s a pleasure, Becca.”
“Oh,” she breathed. Her head tilted back as she drank him in. I swear, if he kissed her in my kitchen I was going to throw my cobbler batter at him.
“I got to get back to work. I’ll be looking for you to come entertain me real soon, Becca Lynn.” Cage said in a low whisper then stepped around her and headed out the door without a backward glance.

#4.
Leaning against the tree, I took another swig of water and wrapped the ice towel around my neck. The breeze was nicer when the scorching sun wasn’t bearing down on you.
“What did you do to Becca Lynn?”
Snapping my head up from its resting place against the tree I took in the first real sight of Eva I’d had since the night at the lake. Her long brown hair was pulled back in a ponytail. She was wearing a short white cotton sundress and a pair of flip flops. She was also trying real hard to look stern. She wasn’t upset with me. She was just being nosey. I liked that.
“Good morning to you too Eva,” I replied unable to keep from smiling.
She tilted her head to one side and continued to force that frown. I’d seen the real thing. This was not the real “angry Eva” face. “Becca Lynn hasn’t come around in two days. That isn’t normal. Especially since she was so hot after you. So, what did you do to her?”
“I believe it’s what I didn’t do to her.” I took a slow swig of my water but I didn’t take my eyes off her as she let me words sink in.
Shifting her feet she put her hands on her hips. “What does that mean?”
“It means exactly what it sounds like. I didn’t do her. I’m guessing that’s the problem.”
Eva’s fake scowl disappeared and she was frowning. “But I saw you both naked at the…” she trailed off and her eyes grew wider. Two pink splotches covered her cheeks. Eva Brooks had come back to the lake the other night. And she’d seen me naked. Yeah, I was going to have to spend a lot of fucking time in the shower now. The image of her sneaking around to see me naked was just hot.
“Did Eva Brooks come back to the lake and get her eyes full?” I teased.