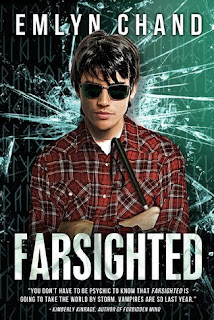 Advanced Chem? Easy. Psychic powers? Gotcha. Save the girl? Uh...
Alex Kosmitoras's life has never been easy. The only other student who will talk to him is the school bully, his parents are dead broke and insanely overprotective, and to complicate matters even more, he's blind. Just when he thinks he'll never have a shot at a normal life, an enticing new girl comes to their small Midwest town all the way from India. Simmi is smart, nice, and actually wants to be friends with Alex. Plus she smells like an Almond Joy bar. Sophomore year might not be so bad after all.


Unfortunately, Alex is in store for another new arrival—an unexpected and often embarrassing ability to "see" the future. Try as he may, Alex is unable to ignore his visions, especially when they suggest Simmi is in mortal danger. With the help of the mysterious psychic next door and friends who come bearing gifts of their own, Alex embarks on his journey to change the future.

My Review.
Farsighted is a book about gifted teenagers who are trying to learn how to control their power.The book is  written from Alex's point of view.A blind boy whose life is not really easy.I really liked Farsighted and i'm glad i read it.
I gotta admit that sometimes i thought that maybe i was wrong and Alex was not blind,because of the way he knew everything that happened around him.Some scenes from the book were written as though he could see.Well,he is blind and the fact that he knew everything that happened around him so easy ,it was wierd,but also shows how special he is.
This is my first book that i read in wich the main character is blind,so i'm a little uncertain how to write this.
Alex's life was i could say normal- if you don't count the fact that he was blind-until two girls caught his attention.Simmi and Sharpi.Since Alex met Simmi everything changes something strange is happening to him.Since he met Simmi he started having visions about a boy ,whose name is Dax,and Simmi's death.Well,he can't actually see what happens in the visions,but he can hear and feel everything.Now his purpose is to save Simmi and stop Dax.
But what if Dax is afraid and he was misunderstood?Alex doesn't know that.All he can think about is how to save Simmi.
Simmi and Sharpi are two girls with powers,or gifts how they say in the book.But Sharpi refuses to believe that that is possible to have powers.Her mother is an oracle and she is the one who told Alex about his future.
Simmi is the kind of girl who believes that everything is possible.I liked her.She is sweet and smart.The way i see it,i think she's perfect for Alex.About Sharpi all i can say is that i didn't like the way Alex used her when he tried to push Simmi away.That was mean,but that was her choice.What i liked about her?She is stubborn.
Alex's visions  about Simmi's death were a little strange ,but when he found out about the fact that he was connected somehow with Dax,i didn't like the way he tried to push Simmi away.Yes,i understand that Alex thought he was protecting her.But c'mon not like that!Alex loves Simmi and he proved that.
About Dax..what can i say?From what Alex saw in his visions,Dax is dangerous-a bad boy who enjoyed hurting peoples.That's what i thought until Dax explained why he wanted to meet Alex and why he did all those things.Still,i'm not convinced that Dax is one of the good guys.
This book was different and i really enjoyed reading it.It was something new and unique.I know this review is not one of the best i wrote(all my reviews are in romanian),but this is my opinion.After i finished Farsighted i didn't know how to start the review,but i hope that what i wrote above is enough.Thank you ,Emlyn,for the e-copy.
I'm sorry if i didn't write everything right.My english is not really that good,but i'm trying!

Emlyn Chand a spus…
Thank you for the wonderful review! You did a great job--don't be hard on your English! I think it's super cool you wrote in your second language, what good practice! I'm glad you liked the characters, especially Simmi. The second book in the series is from her perspective. It's called Open Heart and came out just a couple months ago. I'd be happy to give you a review copy of that as well.

Oh, and would you mind cross-posting your review to Amazon and GoodReads? That really helps authors get noticed, and I'd appreciate it so much!

Oana H. a spus…
Thank you so much ,Emlyn.I'm glad you liked the review.I posted the review on GoodReads,and i will post it on Amazon too.And yes i would love to read Open Heart!
31 iulie 2012, 12:04