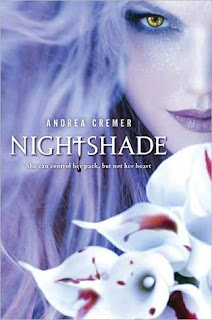 “This is where you belong, Calla.” He pulled me closer, tilting my chin up. “Be with me. Tell me it’s what you want.”
I couldn’t tear my eyes from his. “What I want?”
“Yes. Anything, everything you need, I’ll give you. Always. I promise. Just tell me one thing.”
“What?”
“That you want this, us.” His voice dropped so low I could barely hear him. “That someday you’ll love me.”
My hands began to tremble where they rested around his neck. “Ren, you know we’re going to be together. We’ve both known that for a long time.”
He gave me a hard look. “That’s not what I’m talking about.”
“Why are you asking me this?” I tried to pull back, but he held me against him.
The glimmer of a smile appeared on his lips. “Why not?”
My temper flared. “Are you trying to say that you love me?”
I meant it as a challenge rather than a serious question, but his eyes seemed to catch fire.
“What do you think?” He touched his lips to mine, softly at first, gradually building pressure, parting them.”
Andrea Cremer Nightshade Quotes