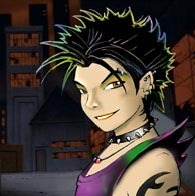 Magnus Bane is the High Warlock of Brooklyn. He was the warlock who signed the mind of Clary Fray after being asked to help erase her early memories by her mother. He first meets the other Shadowhunters at one of his Downworlder parties. He has Clary get him the Book of White, and agrees to help revive her mother with it.

Magnus is described as very tall and very thin, and at least partly Asian. He has black hair that is usually spiked and glittery. He wears all kinds of make-up, such as glitter around his eyes and lipstick. He likes to flaunt his sexuality by wearing rainbow leather pants and other flashy accessories. Isabelle once said he was a "sexy, sexy, warlock." He is also described as having gold-green cat's eyes, and no belly button.

At a young age, Magnus's parents hated him. When his mother found out what he was, she hung herself in a barn. His father was later driven into an attempt to drown him. In response, Magnus burned him where he stood. He was brought up by Churchmen.